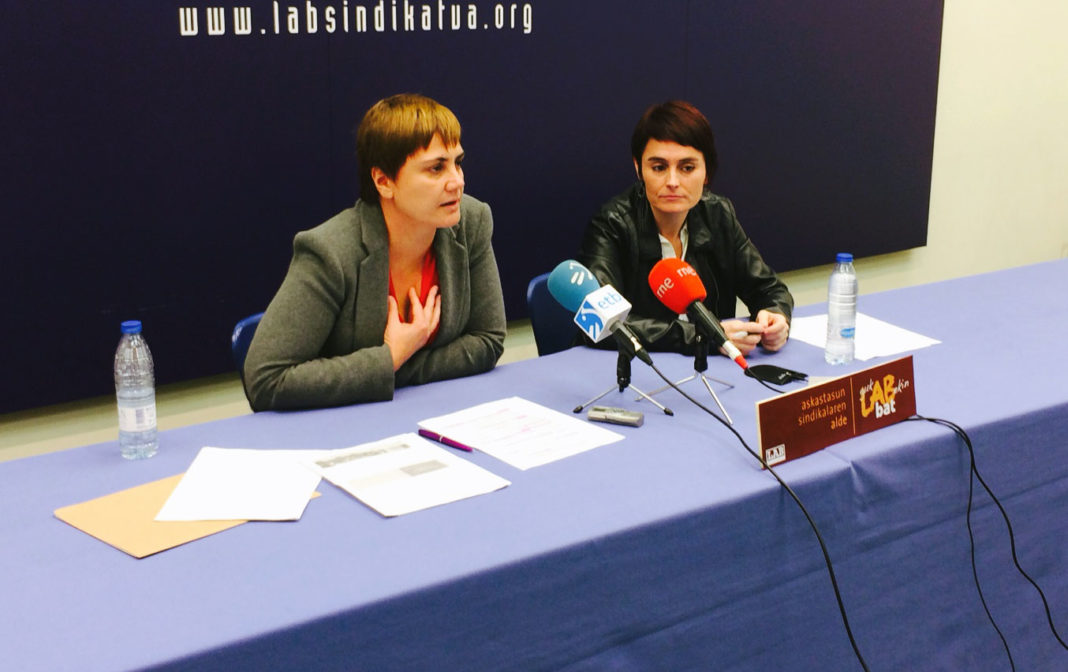 LAB has had access to a document that speaks new initiatives which seek nothing more and nothing less than the banning of ELA and LAB. The summary of the document is that Confebask understands that there are two trade unions that they can’t submit, that are a thorn in their side, and that the best for the interests of Basque businessmen is to expel them from the social-labour sphere “taking away” there character as trade unions.

If this document is true, Confebask is demanding the “de facto” banning of ELA and LAB because getting rid of our character as trade union associations would mean in practice their liquidation as trade unions. Therefore, we are facing the biggest attack against trade union freedom since the legalization of the trade unions.

And the disrespect of Confebask towards the most basic democratic norms doesn’t end there: they use a merely administrative mechanism to prohibit the right of Basque society organize in the trade union in which they please. That is to say, they try to liquidate a basic right and transform the trade union reality through a mere administrative procedure.
Everything indicates that it is an official document. The procedure is in march (process of a Royal Decree) and the CEOE has asked the territorial management associations to make their allegations (look at the web page of management of Alicante).

And the worst: the credibility of the document is the same position and actuation of Confebask. We have denounced more than once their authoritarian character, their total contempt for the necessities of the workers. They have too many rights and they obstruct democracy. This is a scandal, especially serious for two questions:

Confebask is trying to reinstate the Francoist model where the existence of the trade unions is determined by management and regulated by the state at their service. The function is to domesticate the workers and help management in the development of its decisions. To be sincere, the document doesn’t leave CCOO and UGT in a good place.
And above all, alarming because if management understands that it can convert its Franoist desires into political demands it is because they see themselves in a context inclined to their demands. This only happens if management sees where in the political and institutional sphere they can deposit this demand.

With this document Confebask ends the cycle that it began in 1989 left the table of employment because we in ELA and LAB called for a general strike in favour of employment. Confebask said then that it wouldn’t return to negotiate with trade unions who confront their power. Since then Confebask hasn’t done anything but radicalise their position at the time of putting their interests above everything, a position that they have taken to the extreme in the crisis where they have gained their great treasure: a reform to liquidate Basque agreements. And throughout this journey they have maintained a steady hand with the trade unions who have committed to confront them: take away capacity and try to submit LAB every time that this trade union has made proposals to reach agreements that generate possible solutions.

Confebask hasn’t sought an agreement in any case because they don’t seek to resolve economic and labour problems. Their obsession is to resolve their problem which are labour rights, workers who organise to defend them and one that doesn’t renounce having political, social rights…

The main problem of this country at the time of building an exit to the crisis is this management. It isn’t LAB, it isn’t Basque trade unionism, it’s Confebask and the subordination of the Basque government to their positions.

We demand the reprobation on the part of the Basque Parliament of this Management for being antidemocratic and for being a true political obstacle at the time of normalising and reestablishing the relations between social, institutional and economic agents. We extend the initiatives to the three General Assemblies so that they condemn Adebi, Cebek and Sea.

We demand the Basque government to stop legitimising and covering for this management, and to their way of acting… suspends the convocation of a table of social dialogue. A demand that we also extend to CCOO and UGT.

Equally, we ask to take on again the question the legitimacy of this management. We don’t believe that this is the majority position of Basque businessmen. A long time ago Confebask stopped defending the interests of medium and small businesses to be the spokesperson for the large businesses.

Also, it is necessary to open a real process of debate and negotiation about the framework of labour relations that we need. It is the responsibility of Basque institutions to guarantee trade union freedom and the right to organise and fight for their interests.

We are in contact with ELA, we will be with the rest of the trade unions. We are going to make the document known to other trade unions of the state with the objective of agreeing on a joint response.

Finally, we want to put value on the labour of all the workers who have organised to fight collectively in favour of the rights of the great working social majority. Our biggest recognition to the workers who have organized in LAB and that from this trade union confront this management to defend labour and social rights. We make a call to continue organizing in centres of work and in society because this is the way. Yes, we are an obstacle, we want to continue to be so and we will work so that every time the resistance found is bigger in the businesses and in society in general.