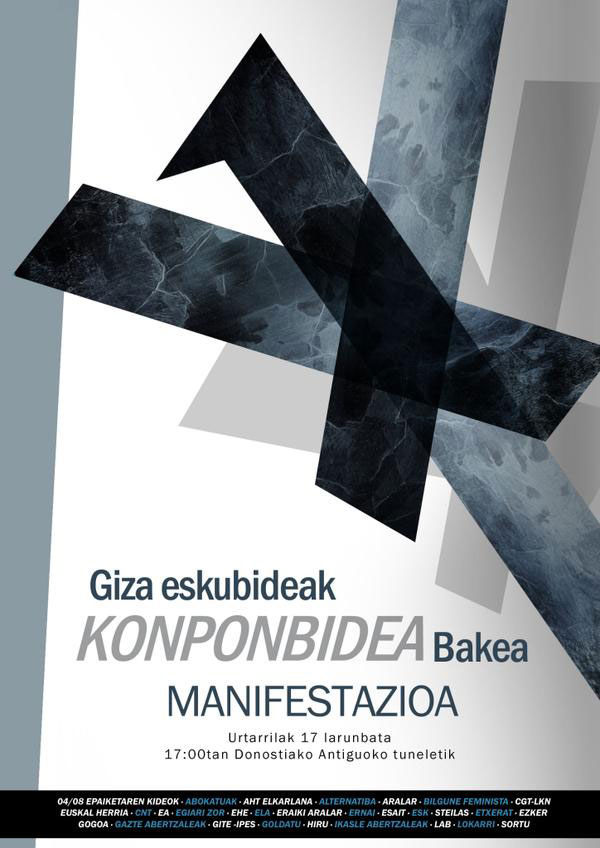 Yesterday another police operation has meant the detention of 16 people, among them numerous lawyers who exercise their profession representing and defending Basque prisoners, has forced us to go back in time as if everything that has happened in the past years in the Basque Country has been in vain. Yesterday’s raid was totally without cause if we take into account that these were people easily located, that they had put themselves at the disposition of the judge who ordered their arrests and that they carried out their work in the Spanish National Court, in prisons and in offices publicly known.

Once again, after this police operation we come again to perceive circumstances and elements that give us a glimpse of reasons of a political nature and that make us suspect that the true objective has little or nothing to do with that stated by the Spanish government.

Apart from the direct consequences for those detained, these actions in their reiteration, have trampled once again the fundamental rights and guarantees which must protect all citizens and that, in an authentic democracy, must be assured above interests of another kind.

The arrests took place at a moment in which the penitentiary policy of the government of Spain is being strongly questioned by ever more extensive political, legal and social spheres. In the measure that the gestures of solidarity are increasing, the state criminalizes them and converts them into a crime. They are generating a growing deslegitimasation for the measures of exception that the government of the PP is insisting on applying against the Basque prisoners suffering dispersion.

It also took place after this Saturday when tens of thousands of people mobilized against the penitentiary policy. Today the Spanish Supreme Court will decide about the release of numerous persons who have already completed sentences in the French state, and the same day in which the trial began in the Spanish National Court against 35 activists of the Abertzale Left, who, among other things, have been left without lawyers after the arrests.

These operations directly attack a new political and social situation in which important efforts are being taken to promote and make a reality of peace, freedom and democracy.

Facing that, we confront a state insisting on the contrary, a government that reinforces strategies that in themselves suppose a violation of human, civil and political rights instead of contributing and assuming responsibilities to clear and consolidate a path that leads to overcoming the conflict and its consequences.

It’s time for this Country to get out of the spiral that pretends to have it tied to the Spanish state, it’s time to look ahead, to commit and take steps to advance towards a future in peace, freedom and democracy. Not everything is right and we are not ready to give away our future to the irresponsible politicians of the Spanish government. The citizens of the Basque Country have already decided that we want to live in peace, democracy and freedom. We’ll make it a reality. We’ll get out of the spiral.

For that the political, social and trade union agents present in this press conference call for a mobilization that next Saturday will take place in Donostia at 5pm from the tunnel of the Antiguo.